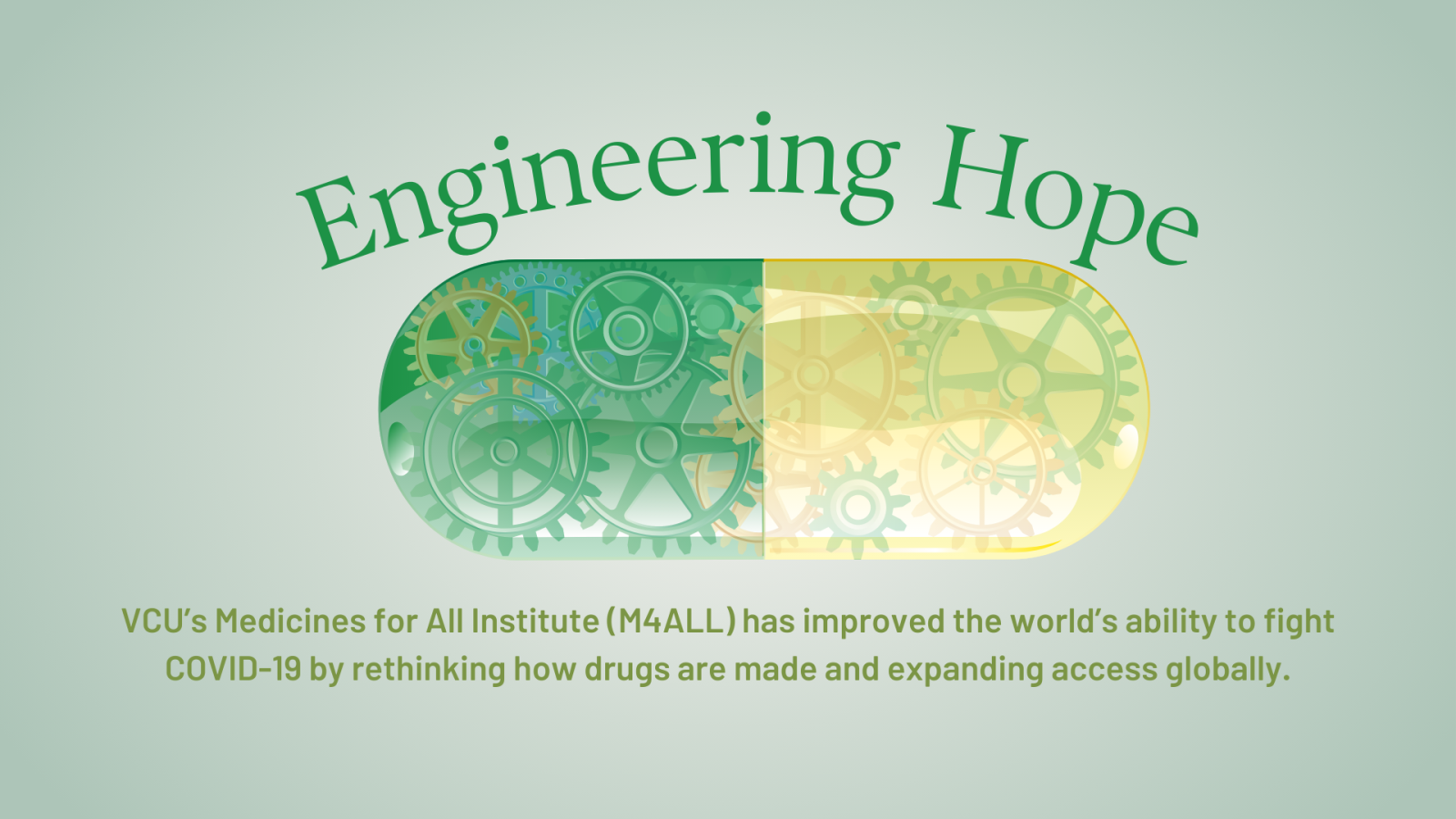 By the time 2020 arrived with a global pandemic in tow, the Medicines for All Institute, a research group at VCU’s College of Engineering, was already poised to help the world fight back against COVID-19.

The M4ALL lab had been working since 2017 to rethink the chemistry and other processes that go into manufacturing specific drugs, which in turn had been successful in improving access and driving down global production costs of medications for HIV, malaria and tuberculosis.

So, as the pandemic began to envelop the world, Frank Gupton, Ph.D. — founder and CEO of M4ALL — put COVID-19 directly in the crosshairs of his lab’s unique work.

He called his longtime partners at the Bill & Melinda Gates Foundation to ask what projects they had that he might help with. The foundation initially asked Dr. Gupton to work on a drug called remdesivir, which was the first fully approved COVID-19 drug treatment in the U.S. In fewer than six weeks, M4ALL developed a less expensive process for manufacturing the drug using more readily available materials that doubled the product yield in half as many steps to produce one of the key building blocks. By summer 2020, Gilead Sciences signed voluntary licenses with generic manufacturers to allow for distribution or manufacturing of remdesivir in 127 countries, largely thanks to M4ALL’s new process.

With the fast success of remdesivir in hand, Dr. Gupton went back to the Gates Foundation in late 2020 for more work.

“They said, ‘We’ve got this new drug that’s in development called EIDD-2801,’” said Dr. Gupton, who holds the Floyd D. Gottwald Jr. Chair in Pharmaceutical Engineering, and is professor and chair of VCU’s Department of Chemical and Life Science Engineering. “They gave me the structure and synthesis of it, and we really felt like we could make some huge inroads into that process as well. We started working on it right away, and within a couple of months we developed a whole new way to make that molecule.”

EIDD-2801, discovered by Emory University scientists and developed by Merck & Co. in collaboration with Ridgeback Biotherapeutics, came to be known as molnupiravir. Early data suggested the broad-spectrum antiviral could cut the risk of serious disease and death due to COVID-19 by up to half. It was poised to become a pill that people infected with COVID-19 could take at home to prevent hospitalization and fill a huge gap in countries where people lack easy access to basic health care and vaccines.

One of the interesting things about the pharmaceutical industry is they’re using 19th-century technology.

By October 2021, The Wall Street Journal and other news outlets had reported that the Medicines Patent Pool, a United Nations-backed nonprofit that aims to expand poor countries’ access to drugs, would work with multiple drugmakers to produce molnupiravir for 105 nations, including Pakistan, Cambodia and all of Africa — and the reason it was possible was the new manufacturing process developed at M4ALL.

Dr. Gupton’s M4ALL team did not slow down after its success with two COVID-19 drugs. In fact, the success was energizing, and they sought more. In 2021, the research group set its sights on a Pfizer drug called Paxlovid, which was shown to reduce hospitalization or death by 89% in high-risk groups when taken within five days of symptom onset. The M4ALL team is currently working with Pfizer and the Bill & Melinda Gates Foundation to develop a robust supply chain as well as an efficient chemical process for the production of this important treatment.

Founded in 2017 with funding from the Gates Foundation, M4ALL examines commercial drug manufacturing processes to find ways to substitute lower-cost raw materials, simplify operations and increase yields. It then transfers its findings to manufacturers and suppliers that can reduce consumer prices and establish production closer to patients, where it previously wasn’t economical to do so.

M4ALL’s early work included nevirapine, a widely prescribed treatment for HIV that is on the World Health Organization List of Essential Medicines. Dr. Gupton’s team pinpointed inefficient chemical conditions and production processes related to the drug, then streamlined routes to the materials that come together to create its active pharmaceutical ingredient (API), ultimately reducing input materials, waste and cost.

Synthetic processes to develop new APIs, especially in times of great need such as a global pandemic, often evolve with limited regard for commercial viability and efficiency. These early processes help define the final commercial production processes because they are the fastest route to market.

When the drugs are in market but still being manufactured through their original inefficient processes, that is where Dr. Gupton’s team makes an impact. “We look at drugs with a new set of eyes and some new chemistry tools, and we make them more cost-effective and more accessible to people around the world,” he said.

The fresh perspective M4ALL is applying also reduces the environmental impact of drug making. Through its original production processes, for example, nevirapine produced about 60 kilograms of waste per kilogram of final product, but Dr. Gupton’s team cut that waste to just 4 kilograms.

“One of the interesting things about the pharmaceutical industry is they’re using 19th-century technology,” Dr. Gupton said. “Active pharmaceutical ingredient manufacturing has been and still is practiced using batch manufacturing platforms.” This technology is like using massive beakers to manufacture drugs in single lots. But Dr. Gupton’s team is implementing continuous flow chemistry when and where it can, which is a process more akin to an assembly line.

“The pharmaceutical industry represents roughly 10% of the U.S. GDP,” Dr. Gupton said. “They are essentially the only ones not using an assembly line approach to manufacture their product.”

It took Dr. Gupton, who is a former pharmaceutical industry executive, and his VCU M4ALL team just a few months to completely rework the way molnupiravir can be manufactured.

“The way we typically do these projects is to begin with a benchmarking analysis, and we’ll identify what the cost is of the existing process and the cost drivers associated with it,” Dr. Gupton explained. “Then we’ll home in on the opportunities to make improvements and potentially alternative ways of producing those molecules for the final product. And we were just fortunate in the case of molnupiravir that we came up with some really good ideas that would help quickly.”

After this initial phase of brainstorming, the team went into the lab to test their ideas and the feasibility of each.

“Once we’ve identified which chemistry actually works, then we down select the process and do optimization work on the one or two processes that we’ve identified,” Dr. Gupton said. “And this phase also happened really quickly.”

The team’s fast success had to do with a combination of things, including established protocols for these types of projects, the gravity of the historical time in medicine and human history, and the fact that all the team members were focused on one goal due to non-COVID-19 research being halted at the time.

The two processes originally developed to manufacture molnupiravir used a nucleic acid called uridine as a starting material, and one of M4ALL’s major changes was to use a different nucleic acid, cytidine, which is less expensive and more readily available.

The team also developed a more efficient way to group the molecules of the drug together, and a new high-yield enzymatic process they implemented requires only two chemical transformations, cutting the number of steps in half.

All of these updates to the manufacturing process cut the cost to produce the drug from about $2,000 per kilogram to less than $200 per kilogram.

“In the end, we developed two alternative ways of making the compound,” Dr. Gupton said. “We can make it by a straight chemical process, or we can take one of the steps and do it enzymatically. So, people who have experience with using enzymes in commercial operations can use that process, or people who don’t have that experience can do a straight chemical synthesis. We have very strong evidence that the processes that we have developed are being taken up by commercial manufacturers around the world based on a dramatic increase of cytidine purchases, which is the key building block for our process.”

As part of its agreement with the Gates Foundation, M4ALL always publishes its findings online and makes them available to any manufacturer. In this case, Dr. Gupton’s team went a step further, publishing in two major journals — Chemical Communications and ACS Omega.

Paxlovid is an antiviral treatment used to help speed recovery from COVID-19 in people with mild to moderate symptoms but who are at high risk of bad cases. In clinical trials, the drug reduced the risk of hospitalization or death by 89% compared with a placebo. The Medicines for All team is taking an end-to-end approach by examining two of the key starting materials that represent a major cost component of the active ingredient. In parallel, the group is evaluating alternative and potentially more efficient methods to convert the starting materials into the active ingredient. This collaboration between Pfizer, the Bill & Melinda Gates Foundation, and Medicines for All represents a unique opportunity to address this major health care issue.

To end this pandemic, we need to ensure that everyone, no matter where they live in the world, has access to lifesaving health products.

Impact Across the Globe

The alternative manufacturing processes for molnupiravir and Paxlovid are expected to prevent supply chain difficulties and reduce costs around the world for drugs that have been shown to reduce risk of severe illness by 30% and 89%, respectively. Merck and Pfizer are facilitating these positive outcomes by licensing the drug to Medicines Patent Pool for production in low-and middle-income countries.

In addition, Pfizer is partnering with the United Nations Children’s Fund (UNICEF). In March, The Wall Street Journal reported that Pfizer plans to “sell up to four million treatment courses of its COVID-19 pill Paxlovid, which will go to 95 low- and middle-income countries as part of the company’s effort to expand access to the pill beyond wealthy countries.” Pfizer said Afghanistan, Pakistan and Zimbabwe are among the countries where UNICEF will distribute the pill.

While the new processes created by M4ALL are published and available to anyone, Dr. Gupton has been working with several nations and specific manufacturers to answer questions and provide tips on best practices in manufacturing these drugs. Recent talks with facilities in South Africa could lead to M4ALL’s process guiding development of one of the first APIs ever produced on the African continent.

Wealthy countries such as Australia, South Korea and the U.S. were quick to reach supply deals with Merck, but the pharmaceutical company’s licensing deal with Medicines Patent Pool is an “effort designed to avoid the kind of rich-poor split in access that has marked the COVID-19 vaccine rollout,” reported The Wall Street Journal in October.

Many of the countries covered by the molnupiravir and Paxlovid licensing deals have limited COVID-19 vaccine supplies. Supported by Gates Foundation funding, these are the countries in which M4ALL is working alongside generic drug manufacturing facilities to help implement its new cheaper, easier, higher-yield process.

“To end this pandemic, we need to ensure that everyone, no matter where they live in the world, has access to lifesaving health products. The unjust reality, however, is that low-income countries have had to wait for everything from personal protective equipment to vaccines. That is unacceptable,” said Melinda French Gates, co-chair of the Gates Foundation, in a press release. “(This) commitment will ensure that more people in more countries get access.”

If you are interested in helping the Medicines for All Institute improve access to critical medications in the U.S. and around the globe, contact Brian Campbell, senior campaign gift officer, at 804-828-1475 or becampbell@vcu.edu.

Help improve access to lifesaving medicines by supporting the Medicines for All Institute.