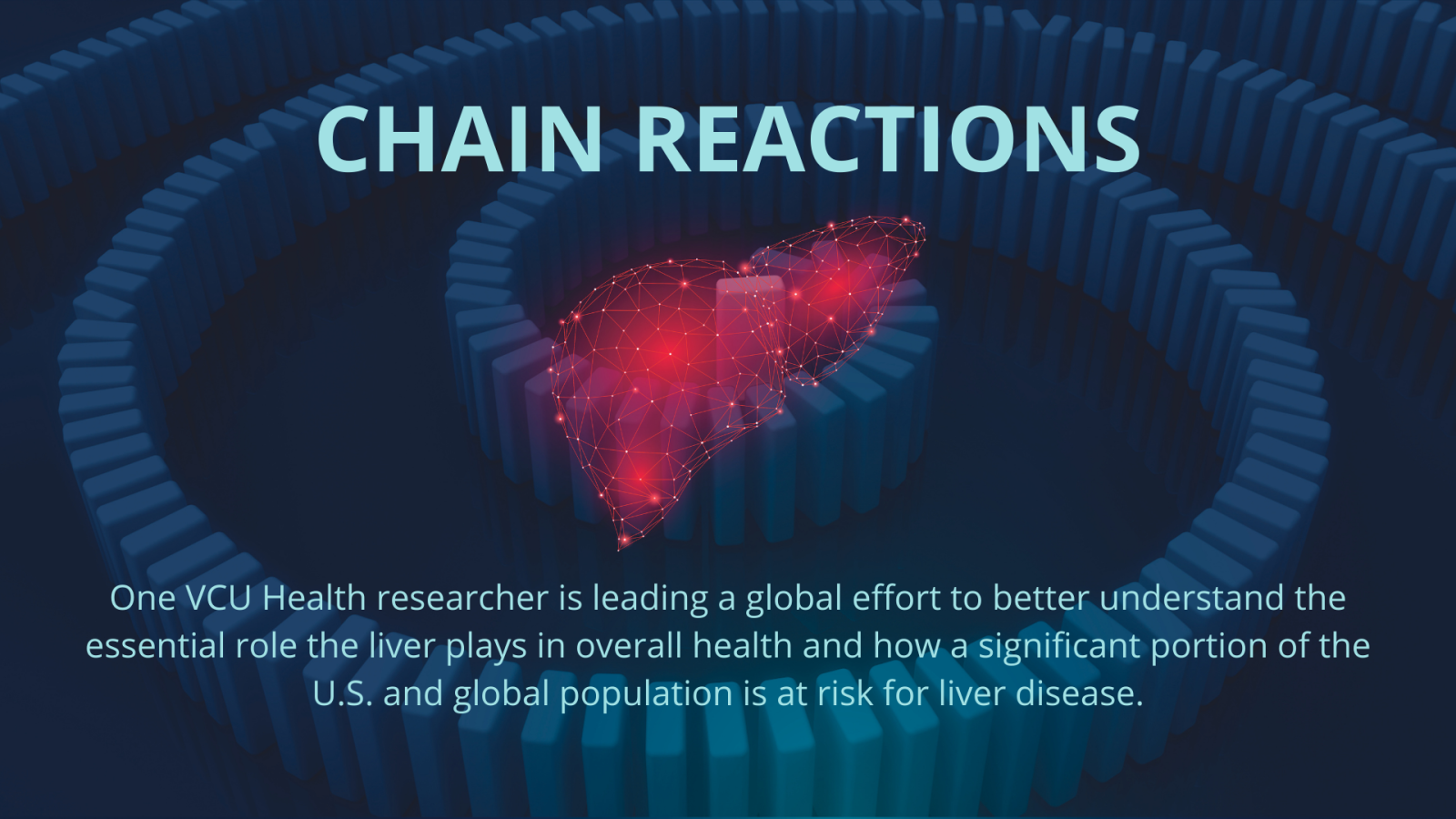 The human liver is around 15 centimeters wide and weighs a little over three pounds on average. It’s the body’s second-largest organ after the skin. This reddish-brown powerhouse sits beneath the diaphragm, on top of the stomach in the upper right-hand abdominal cavity. And it’s probably the body’s most unsung hero.

When a person nicks themselves shaving, the liver produces proteins to regulate blood clotting and ensure the bleeding stops. After a good meal, the liver works overtime to aid digestion of rich food, filtering blood as it leaves the stomach and intestines and removing harmful things like cholesterol and bacteria before they wreak havoc in other parts of the body. There are more than 500 vital functions which the liver helps the body perform, and the organ’s health is linked to heart disease, cancer, diabetes, kidney failure and Alzheimer’s.

“The liver is the only way you can get rid of extra cholesterol,” said Arun Sanyal, M.D., professor of medicine, physiology and molecular pathology in the Department of Internal Medicine at the VCU School of Medicine. “Those who take statins are really taking a drug that works on the liver to lower cholesterol. The liver controls how the heart works, and it generates fuel and controls the supply of energy for all the body’s other organs. It’s complicated stuff.”

Few people know more about the liver’s inner workings than Dr. Sanyal, the Z. Reno Vlahcevic Professor of Gastroenterology and inaugural director of the new Stravitz-Sanyal Institute for Liver Disease and Metabolic Health. His research has been animated by a desire to discover and research ways to help patients he sees in the clinical setting, and mentorship will also be at the crux of the new liver institute, Dr. Sanyal said. He serves as associate director of KL2 Career Development and Mentoring at VCU’s C. Kenneth and Dianne Wright Center for Clinical and Translational Research.

His curiosity for liver health started decades ago when Dr. Sanyal began seeing patients show up in clinic with advanced liver disease after few warning signs and only having organ transplant as an option to survive. Dr. Sanyal knows most individuals have too little appreciation for the lobe-shaped organ he has grown to love and the critical role it plays in overall health. He chairs the National Institutes for Health’s clinical research network for nonalcoholic steatohepatitis (commonly abbreviated NASH). NASH is a form of nonalcoholic fatty liver disease in which inflammation and fat deposits in the liver cause fibrosis, or scarring, which can lead to permanent damage and cirrhosis. In early stages, the damage can be alleviated, but no treatments currently exist for later-stage NASH, and transplants alone cannot solve the problem. Nationally, there are only around 9,000 liver transplants each year. Three people die on the liver transplant list each day.

Contrary to what most people assume, liver disease should not be primarily associated with alcohol and drug abuse. More than a quarter of the world’s population goes about their everyday lives unaware of a potentially significant threat to their health. Many have probably never heard about nonalcoholic fatty liver disease, but new evidence suggests they should all be paying attention to Dr. Sanyal’s research. Dr. Sanyal has been studying liver dysfunction and disease for more than 25 years, and in his recent articles published in The New England Journal of Medicine, he paints a concerning picture for many Americans, unless the medical profession invests in the diagnostic tools and treatments needed.

I have always felt that we’re very fortunate in an academic setting that when we walk in to see a patient in a clinic, the patient is like a road map... Over the last 20 years, we have not only been able to better understand at a chemical, molecular and a cellular level how liver disease develops and progresses to cirrhosis, but also how it is linked to all these other conditions.

Nonalcoholic fatty liver disease is a condition where fat deposits in the liver cause inflammation and scarring that can threaten the liver’s function as well as instigate other issues in the body’s major organs. The condition is more closely linked to obesity and diabetes than the more familiar liver diseases associated with alcohol consumption. That means many people, while running errands, enjoying time with family and working, are also gradually accumulating fatty deposits in their livers that can lead to serious organ disease and death if left undiagnosed and unaddressed.

Often, the warning signs come too late to reverse the damage. As fat builds up in the liver, inflammation and scarring affect the liver’s function in more than 500 vital processes for the body. Left unaddressed, the scarring and inflammation could progress to cirrhosis of the liver, making organ transplant the only option. Demand for liver transplants has grown steadily since 2012, and the potential prevalence of severe nonalcoholic fatty liver disease will exponentially dwarf the supply of potential organs.

Since the late ’90s, Dr. Sanyal has worked to develop a better understanding of the prevalence of the disease and its trajectory after recognizing troubling trends in his clinical work at VCU Health. Strangely, patients with no history of alcohol abuse were showing up with signs of liver disease. His curiosity to understand the cause has animated his research, which has changed the way physicians think about organ diseases and helped to define a still-emerging concept of metabolic health as a framework for understanding the interconnected nature of the body’s functions and the diseases that affect organs. In fact, metabolic health issues create, in the view of Dr. Sanyal, competing threats to the patient’s life by interfering with normal function in the major organs.

“I have always felt that we’re very fortunate in an academic setting that when we walk in to see a patient in a clinic, the patient is like a road map,” Dr. Sanyal said. “It’s like reading a living textbook of medicine. Over the last 20 years, we have not only been able to better understand at a chemical, molecular and a cellular level how liver disease develops and progresses to cirrhosis, but also how it is linked to all these other conditions like diabetes, heart disease, kidney disease and others.

Taken together, Dr. Sanyal said, clinical understanding has evolved into the idea that doctors really should not be thinking of these various conditions as isolated issues because people who have one will frequently have the others as well. That’s a way of thinking Dr. Sanyal refers to as metabolic health, and he’s been a leader in elucidating the concept through his work on liver disease.

His latest findings were published in The New England Journal of Medicine. Through a multi-site longitudinal study of 1,773 adults followed over four years, Dr. Sanyal was able to identify the progression patterns of the disease and the associations between advanced stages of fibrosis and liver-related complications and death. The research underscores the urgency to test for nonalcoholic fatty liver disease, particularly in patients with Type 2 diabetes, a recommendation recently added to guidelines by the American Diabetes Association.

“Historically, many primary care physicians and diabetes specialists have felt that, because the roots of the disease lie in insulin resistance, then if we treat the diabetes, we’ve already taken care of the problem,” Dr. Sanyal said. “And what this shows is that, even within an especially obese, diabetic population, those who have advanced fibrosis are dying of liver disease. Just treating diabetes doesn’t get the job done.”

In the U.S., it’s estimated that there are 2 million individuals living with nonalcoholic steatohepatitis and 1.3 million living with fibrosis stages three and four. Based on mortality rates observed in Sanyal’s study, around 40,000 of those people die every year.

The sheer number of adults with fatty deposits in their liver makes the traditional diagnostic tool — a biopsy — an all-but-impossible task. Given the prevalence of risk factors like obesity and Type 2 diabetes in the U.S., there are simply too many potential patients who need screening.

“The need for a biopsy becomes a barrier to access to care,” Dr. Sanyal said. “We do not have 50 million people trained to do the number of biopsies we would need. We need a simple and routine way to test.”

Dr. Sanyal and his team are working to develop blood-based markers that can be used with imaging-based markers to assess in a noninvasive way how active the fatty liver disease is in a patient. He hopes his work will answer whether fat deposits are present in the liver, how actively are those deposits causing damage, and whether the liver has begun to scar in ways that represent disease progressions. Through this type of diagnostic tool, Dr. Sanyal wants to eventually enable physicians to determine who has significant disease and is at risk of complications and death.

Knowing the problems start when the body is unable to adequately regulate insulin, researchers are exploring the use of diabetes drugs to improve insulin resistance. A few months ago, Dr. Sanyal published additional research in The New England Journal of Medicine demonstrating his evaluation of how one drug for diabetic patients, semglutide, helped resolve fatty liver disease in almost 60% of patients. That drug is currently in phase three trials, which Dr. Sanyal hopes will replicate the successful results. But he continues to explore additional therapeutic avenues to address fatty liver disease.

“There are a number of different approaches,” Dr. Sanyal explained. “We are looking at the other recent drugs that target the same receptors of bile acids to improve the body’s metabolic state. Lastly, we’re working on very cheap, simple solutions such as vitamin E. We published a paper 10 years ago showing that vitamin E can reverse the disease in a significant proportion of patients. And we are now working with the NIH to do additional studies to make sure we get the dosing correct.”

Dr. Sanyal hopes that once he and his research partners are able to identify the right dose, they will be able to conduct a more definitive study to show if vitamin E can reduce scarring of the liver and progression to cirrhosis. He’s most excited about this potential treatment because it would mean that patients could have an extremely affordable first-line therapy that would be easy to access across the globe, even in countries where access to care can be challenging.

If you are interested in learning about ways to align with and support the Stravitz-Sanyal Institute for Liver Disease and Metabolic Health, contact Priscilla Cash, senior director of development at the School of Medicine, at 804-827-4933 or priscilla.wiggin@vcuhealth.org.